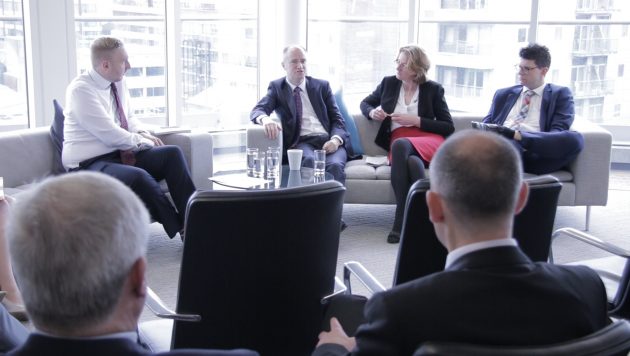 Yorkshire Building Society has hosted more than 60 business and political leaders to hear about the case for further investment in high speed rail connections across the north of England.

An expert panel discussed the regenerative and economic benefits Northern Powerhouse Rail could bring to key towns and cities and how businesses can show their support for the proposed investment.

Attendees heard about the #NextStopBradford campaign which aims to secure a high speed rail station in the centre of Bradford. It is backed by Yorkshire Building Society which is based in the city.

Speakers included Tom Riordan, Chief Executive of Leeds City Council, who spoke of how better connections with Bradford and Manchester would help Leeds reach its full potential. Former Department for Transport Northern Powerhouse Rail project sponsor Jonathan Mottershead, now of Arup, told the audience of how making the case for investment would benefit from business input.

After the event Tanya Jackson, Yorkshire Building Society’s Head of Corporate Affairs, said: “We have thousands of colleagues who live and work in Leeds and Bradford where we have two significant offices. Northern Powerhouse Rail has the potential to bring about huge economic and social benefits for them and the region including, of course, many of our members.

“We know this investment can only come to fruition if the public and private sectors put their full weight behind it so it was very encouraging for businesses to hear about, and speak up for, the project in such large numbers.”

Councillor Susan Hinchcliffe, Leader of Bradford Council, said: “A city centre, high speed station is vital for Bradford and the wider city region, ending our status as a branch line destination and improving connectivity for many across the west of the Leeds City Region.

“Northern Powerhouse Rail will be the Crossrail of the North, improving connectivity to make the alliance of economies on both sides of the Pennines a reality.

“Bradford is Britain’s youngest city. For those young people already in our schools their future could be employment here in my own District, but it could equally be in Leeds or Manchester. As well as the potential, talent and energy of Bradford’s next generation workforce, they need to have both the skills and connectivity to businesses to make the Northern Powerhouse the global success story we need it to be – achieving inclusive growth for the benefit of the whole country.”

Currently a train from Leeds to Bradford takes 20 minutes with Bradford to Manchester taking over an hour. With a Northern Powerhouse Rail station in Bradford, journey time would be cut to seven minutes and 20 minutes respectively. It would also generate an estimated annual boost of £1.3bn for the regional economy through improving access to jobs and markets across the North.

As a country we must take positive practical steps to bring together the North and South and older and younger people. Bradford, as the 5th largest City in England and as the City with the youngest age profile, has an essential role to play in this process and connecting it to the Northern Powerhouse development is critical in achieving this role.